CORY WONG
Back to courses index
Before tackling this course, you should be comfortable with all the material from Unit 2 | The Fretting Hand

Welcome to unit 3! In this section, we'll be taking a look at 5 amazing tricks from Cory Wong's trick bag. These are little ideas that when applied to funk playing, take you to a whole new level. Cory Wong will often call upon these tricks and ideas in his songwriting, so this will help you identify them when listening to his Vulfpeck work, or solo albums. Check out the first video to get started and click here to check out the Materials Section below to access backing tracks!

An absolutely essential part of any good funk players repertoires is their understanding of dominant 9th chords. These are chords based around major triads, but bringing in a flattened 7th to give a slightly more "incomplete" or "unresolved" sound. This is great for genres like funk or blues, that require that extra edge to the sound that you don't get from your basic major or minor triads. Let's take a look at the theory first:

We can see that the chord is made up of the dominant 7th (1,3,5,b7) as wells the 9th ontop. This is essentially the 2nd degree of the scale but up an octave! It's an awesome extension that slightly softens the dominant sound, and is absolutely perfect for funk. Please note that the 5th degree is somewhat optional, so can be removed, and the root is often taken away too as the bass player is playing that! 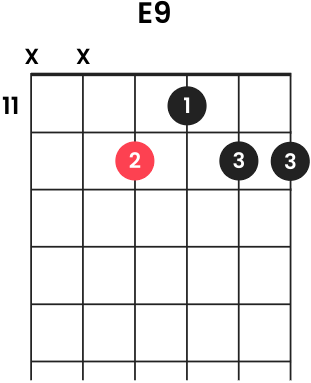 This is another absolutely classic "Wong-ism", which is to use a dominant 11th chord as well as the dominant 9th chord. It's a really cool extension that brings a slightly different vibe, and is really easy to apply! The basic theory is as written here:

In practice, however, we will never be playing all of these notes at the same time, and Cory Wong tends to prefer a chord shape that has this structure:

Use the chord shapes that Dion was working through in the lesson and get them under your fingers. They are relatively easy to find, with the root note being either on the high E string or A string. Have fun! 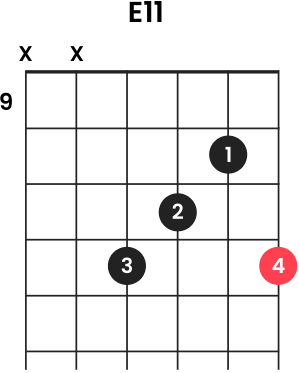 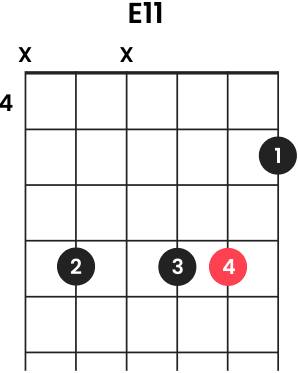 Next up, we've got a fantastic way to turn your single note pentatonic lines into a super cool funky groove! The idea is to take your pentatonic note and play the 4th note above it at the same time. Crucially, this is a 4th within the pentatonic scale, not just generally! For example, if we took a look at this scale shape:

Notice how the distance between these two notes is a 4th (root to 4th). Well, you can apply this same principle to all the notes on the scale where the notes fit neatly into a 4th like this (as simple as the notes being stacked on top of each other!).

At points within the scale, you'll actually be playing a major 3rd (see the diagram below). The basic concept is just to learn to run through the scale shape with these "parallel" notes on different strings. Once you've done that, it'll give you instant Wong!

Let's now up the difficulty with this technique, and learn a cool little groove that you can have some fun with. Use the tab to work through it, as well as relate the shape to our pentatonic box 1 in the key of C minor. Be sure to use the backing track groove as well so that you can work on making the scale sound super groovy!

How It Should Sound!

This lesson is truly an advanced concept, but one we can break down to make it more manageable. Essentially, a 32nd burst is taking your fundamental 16th note groove, and at specific times, double the speed your right-hand moves. Now then, let's start by saying you wouldn't want to consistently play 32nd notes, it's much more of flutter for rhythmical effect. So, you'll be happy that you won't need to sustain the speed!

Use the strumming pattern below to try to visualise how to quickly burst into this little flutter. Normally, you'll be starting on the "4 e and a" beat, and instead of doing an upstroke, you double the speed and do a "down-up" before the start of the next bar. It looks something like this:

You can insert any 16th note strumming pattern you like and have a bit of fun practising through this! You'll certainly need it for the next unit, so good luck!

Test your new skills with these backing tracks!

Unit 4 | Getting It Wong

In this final unit, Dion brings it all together for you! We have a super cool project piece for you to learn that uses the 16th note strumming, a variety of chords, key changes, pentatonic 3rd and 4th, plus everything that goes into a super cool Cory wong style song!