ELECTRIC BLUES ESSENTIALS LEVEL 2
Back to courses index
Before tackling this course, you should be comfortable with all the material from Unit 3 | Slow Blues Solo

In our final unit, we bring it all together by learning a "one-man-band" style of slow blues. Our aim is to internalise that 12/8 groove, and be able to play the chords and lead intertwined, whilst keeping the foot tapping and the feel flowing. It's a very tough skill, but we walk you through it step by step, talking about when to jump into the lead parts, and when to pull back and keep the rhythm pulsing. Once again, this unit provides you with more than just a great piece to learn... It gives you everything you need to play over any slow blues record you put on. Whether you want to play along with the blues greats, or simply sit in a chilled-out corner and bust out an acapella slow blues, you'll have the skills to do so. Check out the first video to get started and click here to check out the Materials Section below to access backing tracks and tab!

To begin with, let's quickly set the scene for this track. First up, we're in the key of G blues now. We're also using the same style of slow blues progression as before, but now with the 1,4,5 chords being G7, C7 & D7. Here is the chord chart:

We're also using the same fundamental rhythm pattern that we have used up to now. The only difference is that we will be adding a lot more flavour over the top. Still, the first task is to play through the 12 bar, with this pattern, along with the drumbeat.

Finally, before we do the first lick, let's discuss using a pick or fingers! You will notice that Dan moves comfortably between the two, depending on what sound he wants to achieve. This is a more advanced concept, so the important part is you do what is right for you at this part of your journey! For example, if you are new to playing in time with your inner metronome, you will really want to focus on this before considering fingerstyle and plectrum shifts. If that's the case, stick to whichever you are most comfortable with now and later down the line you can start playing around with this idea more!

Now then, let's talk licks! The first bar uses the G major pentatonic shape, combined with the G Dominant 7th arpeggio (and a few chromatic notes thrown in for fun!). As always, make sure you can visualise these shapes as you play through them, and check the fretboard diagrams to help!

There is a huge amount going on between bar 2 and 4. First up, we are moving to the 4 chords, then back to the root chord, which allows us to move our shapes and ideas around a little bit. In terms of chord shapes, we are working with the C9 in two positions, as well as the G7 in the C shape position (see the chord boxes). It's so important to know these shapes all over the neck, as you never know where your lead fills will take you. If you land halfway up the fretboard and suddenly need to call upon a G7 chord, you can use your CAGED positions to find one nice and close! 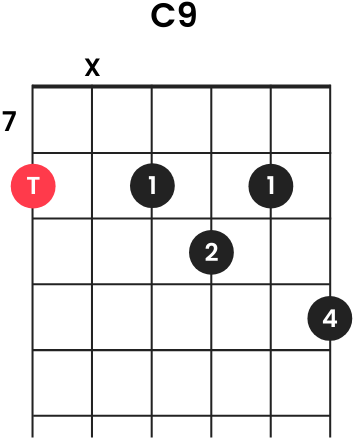 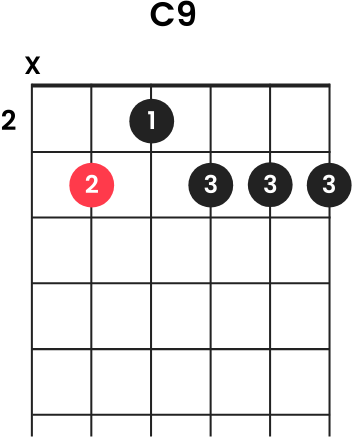 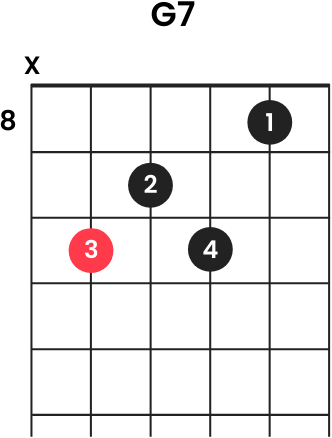 As for the lead fills, we are using the C major pentatonic combined with the C7 arpeggio over the C9 chord, followed by the G7 arpeggio and G minor pentatonic over the G7 chord. Be sure to check the scale diagrams to visualise these shapes! NOTE: Don't let that cool chromatic G#7 chord pass you by either... It's a classic way to add some tension to your blues playing!

During these two bars, we are back on the 4-chord (C7) and we are really zoning in on that sound. We kick off with a cool C minor pentatonic lick, to really bring out that more aggressive sound over the C7, followed by a very cool C7 arpeggio interlaced with a Dbdim7th arpeggio.

Well, exactly! Let's break it down a little. Dbdim7th is short for a "Db Diminished 7th" chord or arpeggio. So the questions, why on earth would we throw this in? Luckily the answer is pretty simple when we break it down. Here are the notes in Dbdim7th:

NOTE: That is the chord construction for a dim7th chord, and "bb7th" is really, just a 6th... However, it is written like this because you are altering the 7th note.

Let's compare those 4 notes with a C7 arpeggio:

As you can see, these two arpeggios share 3 out of 4 of the same notes. This means that all we are doing is raising the root by a semi-tone, which creates some lovely tension, that can then be released as we move back to the root chord. This is a great little tip, and you can always use it when moving from the 4-chord back to the root-chord. Have a little bit of fun with that before you move on!

We now return to the root-chord for two bars, before jumping up to the 5th chord. For the root chord we are going to spend a bit of time re-establishing the groove, especially after a lot of cool licks in the previous bar. So, we groove around on the G7 shuffle (Muddy Waters style) and interlace that with a simple but very melodic G major pentatonic lick over the box 3 of the G major pentatonic scale. Rhythm is the key here, so really try to work on getting the lick to sound bouncy and in time!

We then chromatically move into the D7 chord by first playing a D#7 to create that tension and release. Once rooted on the D7 chord, we utilise our D7 arpeggio (E Shape) initially and then switch to the G minor pentatonic (plus blues note) to hint at a more aggressive tonality. This is a great switch that you can use all the time over the 5 chord, and something B.B King was well known for using in his slow blues playing. Once again, be sure to use the fretboard diagrams to clarify these shapes, and then try to visualise them when playing the licks!

Congratulations on getting all the way through the course! In this final lesson, we will complete the 12 bar and start to take away the guide of the drums, to get your free time rhythm rocking and rolling! In bar 10 we move to the C7 chord, and alongside it play using the C7 arpeggio with the C major pentatonic box 2. We use an almost Hendrix style approach to really pull out the major elements of this C7 chord, using double stops and a "Little Wing" vibe rhythm! Be sure to check out the fretboard diagrams to visualise these shapes as you play through the lick.

... and finally, the turnaround!

We end the track with a classy chord-based turnaround, using all 7th and 9th chord shapes. We really work on that chromatic chord movement, going from high to low, and then low to high to achieve some pretty cool sounds! Remember that by using the same chord shape a semi-tone higher or lower you simply create tension that gets resolved when you move back that semi-tone. It's a great trick, and one you can use all the way through your slow blues playing!

That's it! Well done for getting all the way through the course. You now have slow blues chops that will have guitar players double-taking as you play through your favourite slow blues records. Where do we go from here? Well, apart from waiting for Level 3, which will really take us into the advanced concepts in the blues, you now can consolidate everything you've learnt from level 1 and 2. A pretty big indication that you are improving is that you can now put most blues tracks on and play something over the top. Whether it's comfortably playing along with the chords in any key, jamming out a full solo, or even combining the two like in this unit... All of those skills will show you just how far you have come! Enjoy that feeling, and let's keep the blues alive for new guitar players coming through! All the best, and see you in the next course!

Below are the materials for this group of lessons. You'll find the tab and the backing tracks here so you can practice at a comfortable tempo! 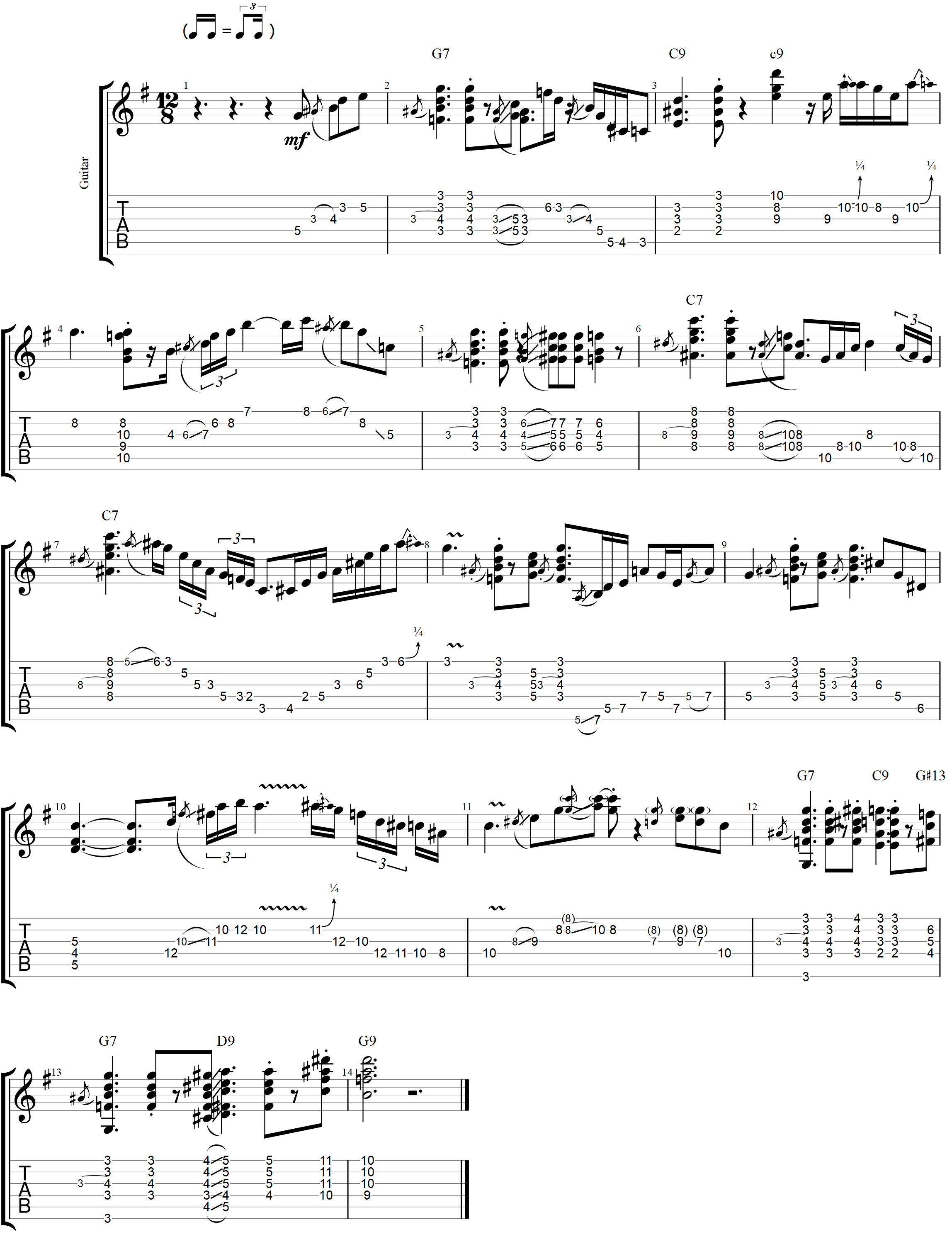 Feel free to bask in glory for a while, or go ahead and try another course if you're hungry for more.