We kick off the course with an intricate slow blues rhythm track. We'll go deep into the theory behind 12/8 time signatures, learn the progression and how to bring 9th, 13ths and various chromatic ideas into your slow blues grooves. What is our aim? Well, in short, to be able to play over (or under) any slow blues track by the time you have completed this unit. Check out the first video to get started and click here to check out the Materials Section below to access backing tracks and tab!

Before we get down to the hard details of this track, let's talk more generally about the idea of 12/8 and how we play over it. A time signature indicates how many beats you can essentially fit into each bar, and is a way to count music as well as easily organise and read music. Up to this point, we are very used to dealing with 4/4 time signatures. If we take a look at the time signature, it breaks down like this:

Before we hit 12/8, let's talk 6/8. This is the core time signature we are talking about, that is then expanded to 12/8 in very slow tracks.

To count through 6/8 you would say "one two three four five six", with the accent being on the 1 and the 4 beats. This is a massive first step to understanding the time signature, and one you can practice with the drum beats available to you. Notice how, when you use the drum beat, the snare is always on the "4" beat. That defines this slow blues sound! as for 12/8, well that's easy... You just do two lots of 6/8. You can now fit twelve eight notes into a bar. This is because, when you have such a slow track, you want to make reading it as easy as possible, and it allows us to fit more guitar goodness into each bar!

your first task... Play through an entire twelve bar in 12/8 time signature using this simple strumming pattern, and any dominant 7th shapes you know!

For the first two bars we are bringing in two very cool chord shapes to add to your repertoire! First up, let's talk 9th chords. A dominant 9th chord is simply a dominant 7th chord, with an added 9th above the chord. The 9th is the second degree of the major scale, up an octave. The notes for B9 will therefore be:

In terms of where we can play this on the guitar, the first two shapes we are using for the track are as shown here. Note: We have drawn them out as a B9, but you simply move them up and down the neck to change root note (i.e. E9 would be the 7th fret for the second chord shape). 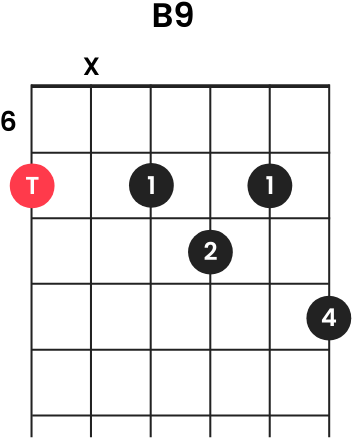 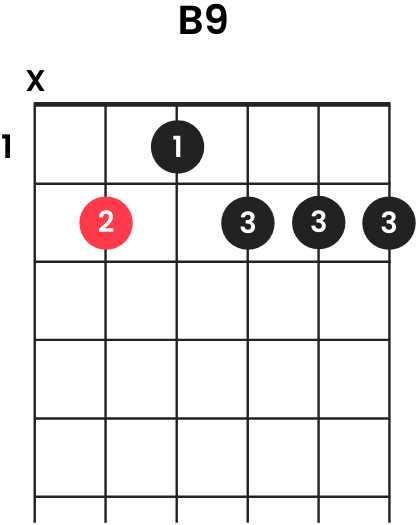 The dominant 13th chord is simply another extension of our dominant 7th chord family. Think of it as being part of the same family, so fundamentally the same makeup, but with a unique extension and character! In this case, and for guitar specifically, we would want this chord formula:

One final thing to note, before going through the actual shape, is that we don't NEED certain notes to form this chord. On the guitar, we have to be selective, as we only have so many fingers to use! The important notes are the root, 3rd, b7th and then the extension, which in this case is the 13th. Taking these notes gives us the chord shape that we are using for the second bar. 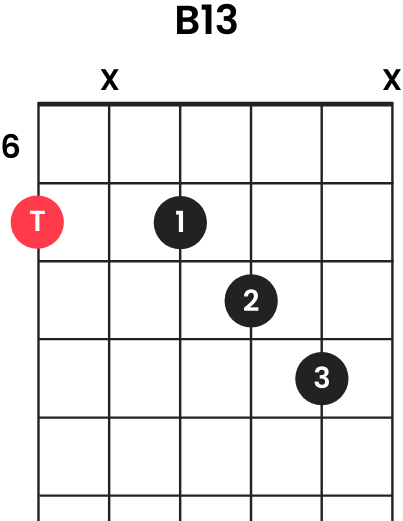 For the next set of bars we are working with two times around the root chord of B7, and then 2 times around the 4 chord of E7. We start by bringing in that cool bluesy shuffle sound, which we covered in the previous unit, before moving to another 9th chord shape, this time based on the D string root note. With this chord added to your playing, you now have 3 fantastic dominant 9th chord shapes to use and master! Take note of those chromatic chord movements, as they create the tension we need to resolve as we change chords. It's an absolute essential part of your blues playing!

In bar 5 and 6 we use one a classic all-time blues phrase, based around the 9th chord shape on the A string. We simply slide the barre from 7th fret up to 9th fret and back, which creates this smooth bluesy sound that you'll want to use over and over again. We work with a few variations of this, which you can interchange. 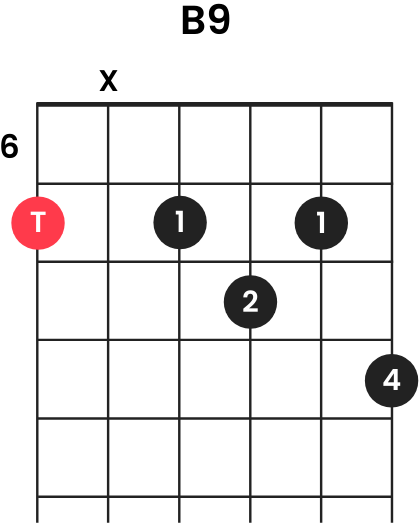 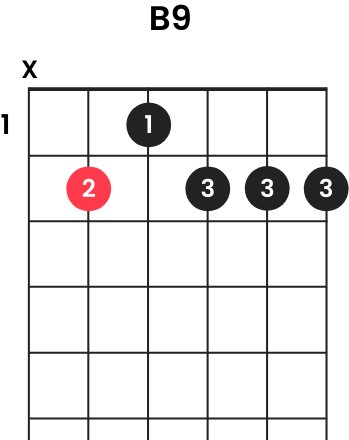 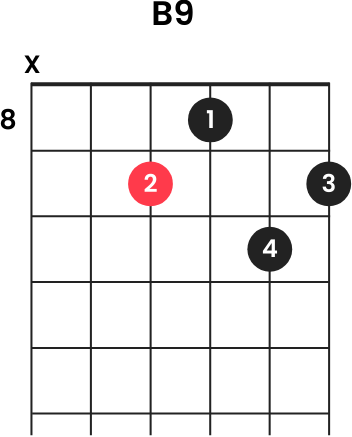 In this lesson, we work through the rest of the track, which reuses a lot of the ideas and themes we've covered so far. We find ourselves back on root chord for two bars, before jetting off to the 5, 4 and then the turnaround. It's important to note that, as we are using the same 9th chord and 7th chord shapes, no matter the actual chord, we can apply the same set of slides and shuffle grooves. This "cut and paste" concept is crucial in the blues and makes it a lot easier to play creatively through the 12 bar system.

How 'bout that cool major lick?

In bar 7 we use a cool little lick, based around the major pentatonic box 3 in B major. Make sure that you can visualise this box as you play through the lick. It's a very cool, and very common way to quickly jump into a rhythmical lick, before coming back to that root chord.

Finally, we add on a cool turnaround to the end of the 12 bar sequence. This, once again, is a pattern that can be copied and pasted into any key. All you need to remember is where the root note is:

For this final lesson of the unit, Dan talks about how you can mix and match all the elements of this track to create your own slow blues. The lesson is all about challenging you to play along to any slow blues record, and use as many or as few of the licks, chords, chromatic movements and grooves as you like. At the end of the day, the blues is about your expressionism, so here is a great opportunity to practice that and see what comes out. Have some fun with this and we'll see you in the next unit!

Below are the materials for this group of lessons. You'll find the tab and the audio here. 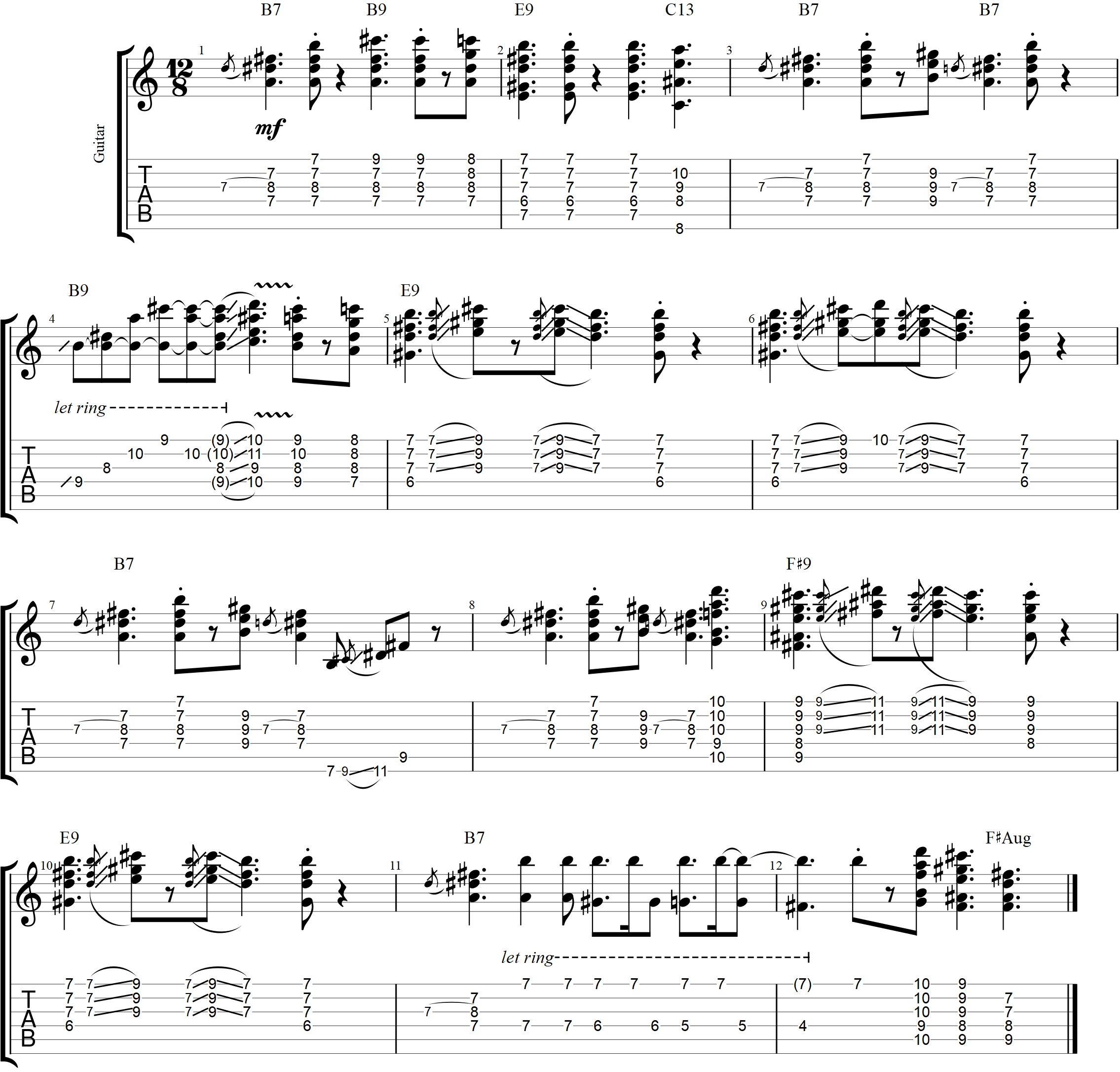 n our second unit, we learn a crucial set of arpeggios that we can use to expand our blues soloing, and even chord playing. Learning dominant 7th arpeggios allows us to target chord tones as we move through our 12 bar blues progression.