ELECTRIC INTERMEDIATES
Back to courses index

Welcome to our course on rock & roll, specifically the unmistakable style of the 1950s! In this course we'll teach you the classic rock & roll shuffle, how to play a 12 bar blues and finally go through an awesome Chuck Berry-style tune!

This content is unavailable on mobile devices, please view through a desktop or laptop browser for the optimum experience.

Below you will find the exercise tab that you can play along to. Be sure to use the slow down function on the tab viewer to play at a tempo that suits you as you build up to full speed.

A 12 bar blues is a standard structure that a huge number of blues songs adhere to. This structure can vary a little, but generally stays the same. For rock & roll we take a 12 bar blues structure and speed it up to add a sense of urgency. Here are the main elements in understanding a rock & roll structure:

1. The chords to use

Use the 1st, 4th and 5th chords of any key. We won't cover the theory behind this right now, all we need to do is work it out practically. Whatever the key (see the fretboard below for various examples), you find the desired root note on the E string. This gives you the first chord. So, for example, we could make an A powerchord to start. Then, the 4th chord is always the note on the same fret on the A string. The 5th chord is then two frets up from the 4th. So, in the key of A, our three chords of the blues are A, D and E. This can be powerchords, major chords, minor chords or dominant chords.

This content is unavailable on mobile devices, please view through a desktop or laptop browser for the optimum experience.

2. The order of chord changes

The 12 bar is so-called because it has twelve bars, as you may have guessed! These 12 bars repeat over and over again. The basic order for rock & roll is shown below; try to get this sequence learnt. Notice also that we use Roman numerals in place of numbers. This means that 'I' is one, 'IV' is four and 'V' is five.

It's time to play through a full rock & roll track! One of the trickiest parts of playing rock & roll is keeping your energy levels high; your fretting hand will be playing wide stretches for a full four minutes during the track! This is something you may need to build up to if it's too tricky straight away. Please listen and watch the full track, then move on to the next video.

The verse and the chorus are essentially the same, as it is the same 12 bar sequence over and over in the song! However, we'll vary the two parts using the rhythm. So, to start with let's look at the 12 bar progression we are using. We are in the key of Bb.

During the verse we are doing exclusively down strums, except we are accenting the beats where we use the little finger. This is shown below. Also, remember that when you change chord you can accent the first hit as a cool little extra if you're feeling confident!

Below you will find the full song's tab / chord chart. Remember you only need to practice the verses at this point. Be sure to use the slow down function on the tab viewer to play at a tempo that suits you as you build up to full speed. 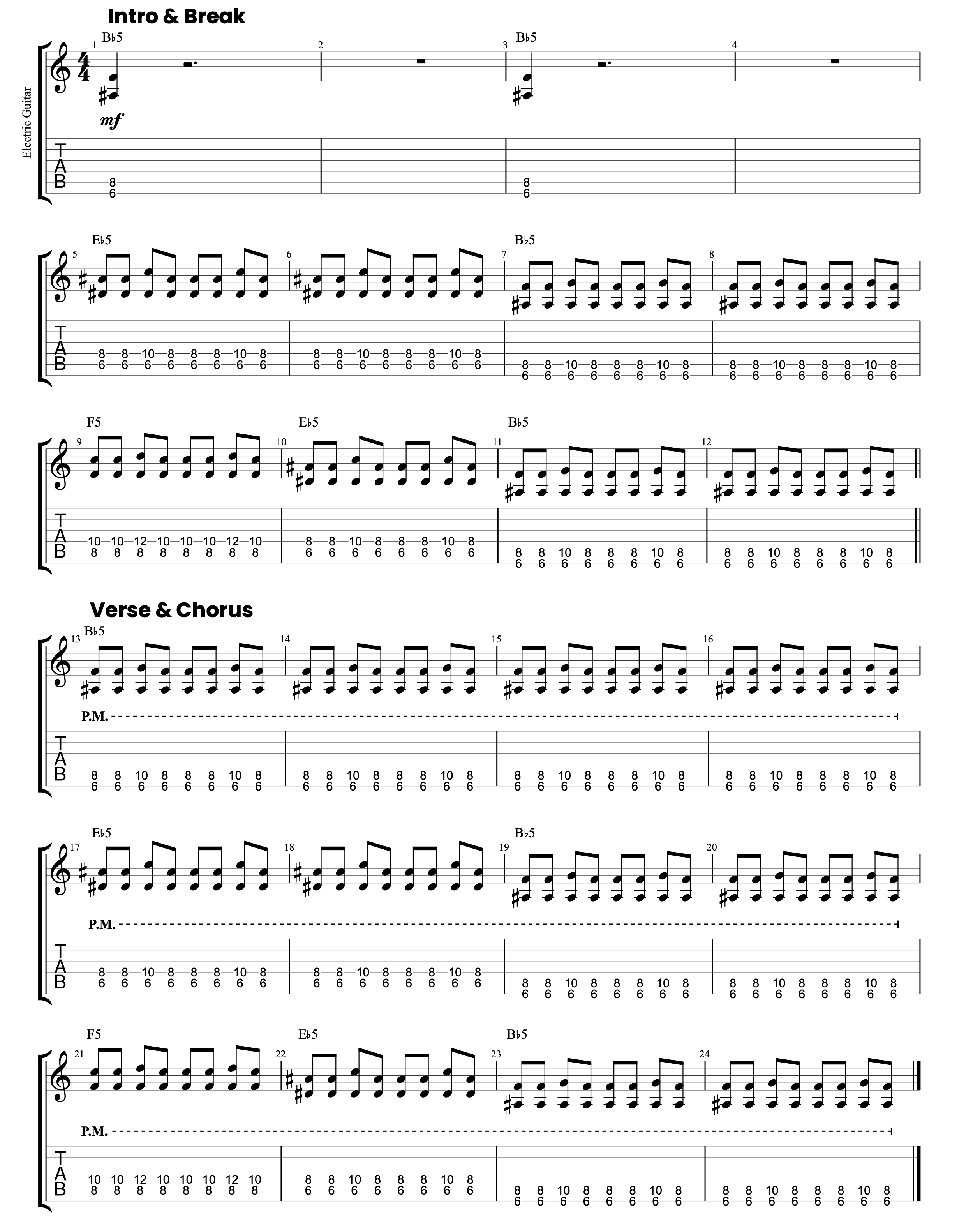 The chorus is identical in structure, but different rhythmically. During the chorus you are strumming down-up strokes rather than entirely down stroke palm muting. This has the effect of widening the sound and to produce a big chorus. The rhythm pattern looks like this:

As for the song structure, all you need to watch out for are the breaks in the music where you play the single strum. These are laid out here:

Below you will find the full song's tab / chord chart. Be sure to use the slow down function on the tab viewer to play at a tempo that suits you as you build up to full speed.

As well as the tab above, here are audio tracks to play along with. They are all at full speed, so make sure you are comfortable playing at that pace before trying them. Good luck!

What is it to play "Hendrix-style"? We'll show you, by combining pentatonic shapes with the CAGED chords we have learnt to create licks within chords.