FUNK ESSENTIALS LEVEL 1
Back to courses index
Before tackling this course, you should be comfortable with all the material from Unit 1 | 16th Note Gym

In this unit we will work through our first full funk track, learning how the guitar player sits amongst the band in a "James Brown era" style groove. We'll talk you through a more complex strumming pattern, how to use chromatics with your 9th chords to create some cool funky sounds, and how we use the 1, 4 and 5 chords very differently in funk to blues. Check out the first video to get started and click here jump to the Materials Section below to access the tab for this unit and the backing tracks!

We will start by laying down the the main groove with the right hand. As we discussed in the previous unit, the right hand needs to be your metronome and your beat machine! Now that we have so many more layers to the track, this is even more important.. If it isn't rock solid, the rest of the track will simply fall apart, so let's get this nailed now! Here is the rhythm pattern.

So the groove is made up of two bars, which then loops. Pay close attention to where the muted ghost notes are (the 'x' markers) as you work through it. For now we'll simply groove on the G9 chord for two bars and repeat until we have it deep into our bones!

It's now time to dive a little deeper into our G9 groove. Let's use the tab to take a deeper look at how we manipulate the G9 chord:

Much like in blues music, we can use chromatics to expand the basic chord, and create something a bit more interesting. In this opening funk groove, we're using the G9 chord as our base, but then using the same shape down a semitone (Gb9) and the same shape up a semitone (Ab9) to create a fun interplay between the chords.

"The chord is still G9. don't count the Gb9 and Ab9 as new chords, just movements around the G9. Pretty cool, right?!"

The key thing to remember is this technique works as long as you quite quickly resolve to the G9 chord. So for example, in this track, we use the Gb9 for just a 16th note beat to slide to the G9. The Ab9 is used a little more intensely, sometimes for a quarter of a bar... But never much more than that. The G9, therefore, remains the focus and the stable element within the groove.

We'll now tackle the next section of the track, which is where we move to the IV chord. As mentioned before, early soul-funk like this is very much based around blues progressions, using the I, IV & V chord... BUT, without the formal 12 bar structure.

"In this track, we've looped the root chord (G9) for 8 times, but it'll often go on until James Brown tells the band to move to the IV chord! So you need to be ready! "

When we finally move to the IV chord, we'll use a different position, based on the E string root note. Here's what the chord looks like.

As for the groove, it's exactly the same as the G9 chord, except you are only really hitting three top 4 strings, as you can see here:

Finally, we'll repeat this section 4 times before we move on, so the chord chart is like this so far:

The final part of the track is all about "turning it around" and creating a pull back to that root chord. Once again, this draws from the blues music, but in funk, it's even more powerful and so full of energy! It also tends to involve "stabbing the chord", which is what we've put in this track. This is the technique of short, sharp hits, that create that funky energy!

Let's take a quick look at this final part as a tab as well as the strumming pattern:

There is a certain artform to getting this part absolutely bang on. The speed at which you need to squeeze the chord, then release it, can take time to master, so go easy on yourself if it doesn't sound super tight on day 1! Focus on getting this part learnt, and then we'll put it all together next time.

For our final lesson in this unit, we will put the whole song together and work on getting it really "tight"! This is an important term for a funk musician to master, as it essentially means locking in with the rhythm section. You want the sound to be tight, which means you want the drums, bass and guitar to be very together and in time. when they are, we can say that they are "locked in" and sounding "tight"!

So, work your way through the whole track and when you feel comfortable with the drums and guitar backing track, start to play along to the full track at slower speeds before finally getting it up to speed with the whole band! Add it to your daily practice now before moving on to the next lesson. Good luck 🤘🤘 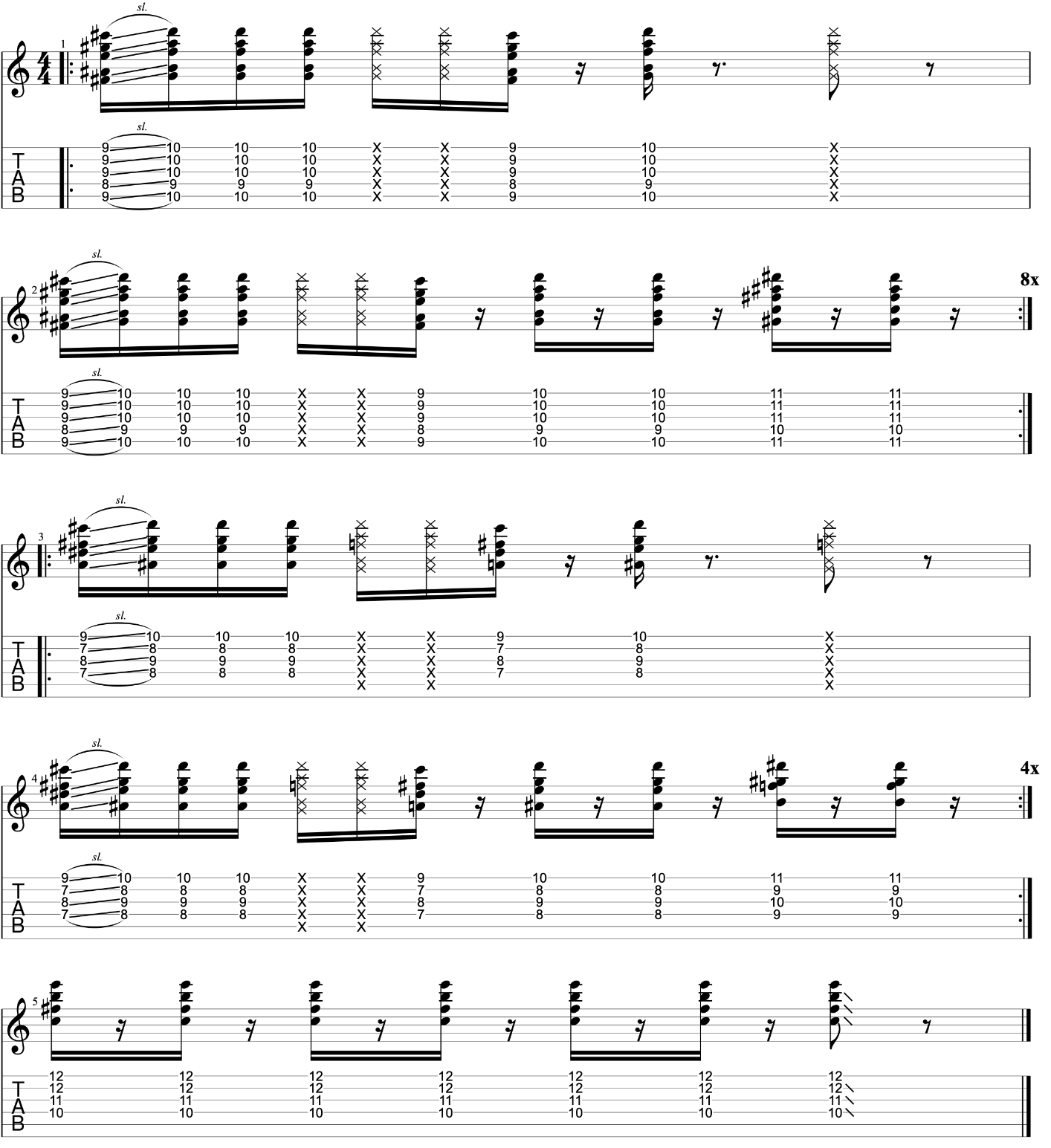 In this unit we'll be turning our attention to the minor 7th CAGED chords, to ensure we learn these fantastic chord shapes across the neck.