5 BLUES LEGENDS PLAY ONE 12 BAR! CAN YOU SPOT THEM ALL?

Firstly, this was fun! When I decided I was going to do a 12 bar blues with 5 different players, it was these 5 players that instantly came to mind. They are unique, they have clear styles, and in theory it should be relatively simple to put a track together as if they were all taking turns jamming over it. So, what do you think? Did I do a reasonable job? Let me know in the comments on the video on YouTube!

So, onto the actual lesson. The whole track is in the key of A blues. This means that the main 3 chords of the track are A7, D7 & E7. If you're interested in how to play the backing track (which I would recommend, as it's brilliant fun and will help you understand the whole thing), here is the tab for the track. 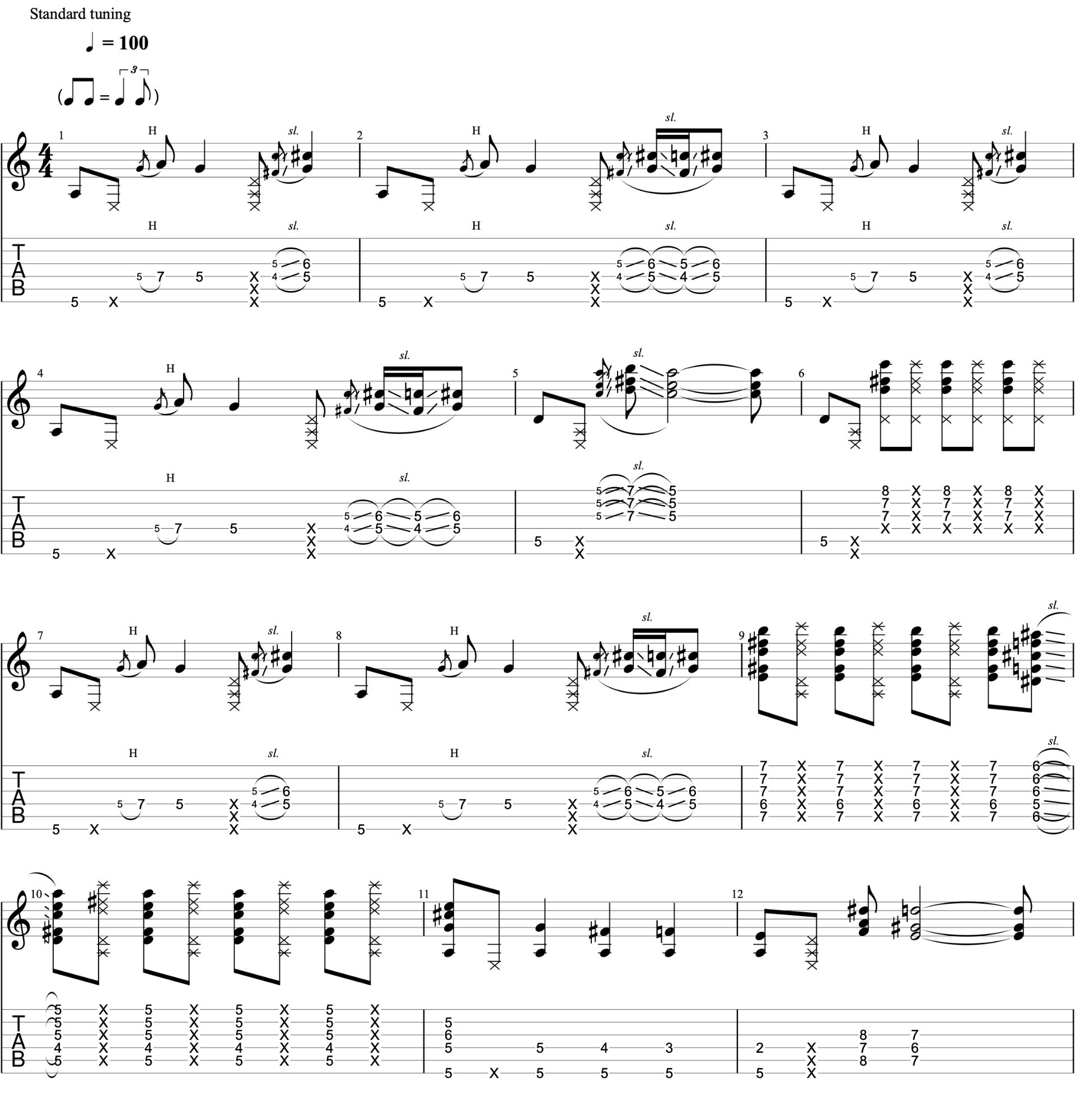 There is a lot going on here, which may feel a tad overwhelming if you're just starting with the blues. If this is the case, and this is hard work, I would recommend checking out and starting with our Blues Essentials Level 1 course before you do anything else.

So, our first lick is in the style of the great Eric Clapton. My all time favourite guitar player, and my biggest influence. I really had zero choice but to start with him. I love the space that Eric Clapton effortlessly creates in his improvisation. No matter how fast the BPM, Clapton can always swing a phrase in his own time, creating all the space he needs. His lick is this:

The lick uses our pentatonic box 1 and 2 in the key of A minor, which you can see below. Remember, if you want to truly understand how Eric Clapton plays, and learn how to use these scales properly, check out our Eric Clapton player study and get started today.

Our second lick is very much in the style of B.B.King. How fun that we could play in such a contrasting way to Clapton's opening lick, and essentially balance out the minor flavour with a hefty wave of major flair. This lick uses the A major pentatonic, played over the D7 chord. This is a classic B.B.King move, all of which you can learn about in detail in our B.B.King Player Study. The core shape we are using is the box 4 of the pentatonic, which you should try and visualise when you play this lick.

And for your reference, as always, here is the pentatonic box you should be visualising…

For our third lick, we turn to the modern blues superstar! Of course, Joe Bonamassa is the sum of all that have come before him, and you can hear shades of Clapton, B.B, Freddie & SRV… But he also brings his own authenticity to the party, as well as his influences outside of the blues. One rather large influence is the immense Eric Johnson, and these light speed pentatonic runs are generally attributed to Eric first, then customised for Bonamassa's blues playing. Needless to say, if you're playing blues and throw a blistering pentatonic run in like this, people hear Bonamassa!

Remember, if you want to learn how to play runs like these, as well as everything else in his epic arsenal, check out our full Joe Bonamassa player study. It's pretty advanced though, so don't start it lightly!

As you can see from the tab, we're very much just using the standard A minor pentatonic box 1, so theory wise it's simple. That, unfortunately, is where the simplicity stops. To build this kind of speed you need to practice slow and fast, which means spend half your time getting the fingers used to the sequence and the shape, and half the time trying to push those fingers to move as fast as they can! Good luck with this one!

For the penultimate lick we're bringing in the Texas treatment! SRV is one of the most recognisable guitar sounds in the world, and it's very hard to mimic SRV without sounding exactly like SRV! In this lick, we happen to fall upon the 5 chord moving to the 4 chord, and Stevie has a very common thread that he is drawn towards when playing the 5 to 4 progression. Namely, we move with the chord. So we play a lick over the E, and then a copy of that lick 2 frets down over the D. Here are those licks.

So the theory is relatively simple. Move the pentatonic box 1 up to the E and the D (12th and 10th fret) and add in the "SRV notes", which are the b2nd and 2nd degrees, highlighted in yellow and blue on this diagram! Check out our SRV player study when you're ready to take on his full style!

Having recently released our full Freddie King player study, I couldn't end this solo without adding a Freddie lick in! This was one of the hardest to add in, as it is very much on the turnaround section, so a little more cluttered in terms of space to play with. However, we are using a few classic Freddie King moves, especially by moving seamlessly between major and minor, and really digging into the strings and into the feel of the lead!

So, we're very much jumping between the A major ox 4 (like with BB King) and then back to box 2 (like with Clapton). Try to visualise those two shapes as you work through this final lick.

And there we have it…

Thank you for watching the video and reading this blog guys! If you're a blues fan, please do check out all of the courses mentioned within this article. If you're unsure what to do in what order, then please sign up for the YGA Club. We'll give you a pathway of courses and lessons that are designed to suit you and your goals. All the best, and speak soon!

Back to the YGA blog